Brewing Up Some Bread

For me baking bread and brewing beer have been naturally connected ever since I returned home from my Junior Year Abroad, which I had spent in Munich. Good bread and good beer were what I missed the most, so I starting making both. So when we came across a space perfect for combining our bakery project and a beer garden concept my partners had in their back pocket, it didn't seem like a stretch at all to me, more like a natural return full circle to my beginnings. Plus, I could make pretzels for the beer garden. And while we don't brew beer at Easy Tiger Bake Shop and Beer Garden, we do serve a selection of the finest craft beers available.

So with the Christmas season approaching, I was inspired by a bread traditionally made for the season in Sweden, to bring that connection a step closer. The Swedish bread is call vörtbröd, or "wort" bread in English. Wort (pronounced "wert") is the sugar extraction from malted grains, usually barley, that is boiled together with hops to balance the sweetness and flavor and then fermented into beer. These days, the bread is most often made with either a powdered or liquid wort extract that is readily available in Sweden, but I have read that it used to be common to be able to procure wort from the local brewery.

I had made a couple versions of this bread using beer, rather than wort, last year. 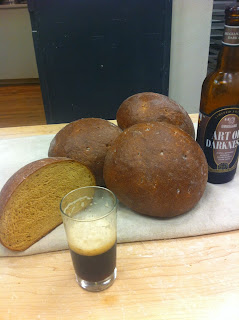 This I made for a beer dinner we did along with Brewery Ommegang. I used their Art of Darkness, a Belgian Strong Dark Ale. We paired it with a chuck roast which also included some of the beer in the braise. 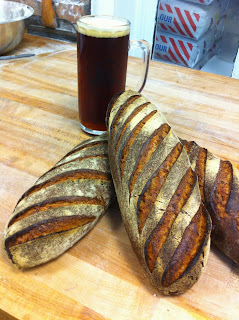 This version we did for a contest sponsored by Stone Brewing Co. using their Arrogant Bastard Ale, a Strong American Ale. It was a little different, not as heavily sweetened as the traditional vörtbröd, and baked in a batard shape instead of a round.

The batches made with beer were flavorful and paired well with their respective dishes, but I still wanted to try this bread using wort instead of a finished beer. I had done some home brewing back in college and again when we worked on a guest ranch for the ranch owners and their guests during hunting season. Well, I got curious about people in Sweden getting wort from the brewery or, as another source said, using some of the wort from the holiday home brewing. I wondered if this was just for flavor, or if they were also using the wort, pitched with the brewer's yeast, as a leavening agent, at least originally. In the 19th century, before the modern strains of Saccharomeyes Cerevisiae best suited for leavening bread were isolated and propagated commercially, brewer's yeast was skimmed from the top of the wort and used as an alternative leaven to the usual sourdough. This technique was used especially in Vienna and produced a "sweeter" bread than those made with traditional natural leavens. I decided to try making a wort and pitching it with beer yeast, letting the fermentation get started and then using that as a starter for my vörtbröd.

For all of my previous beer making, I had used a liquid malt extract, a thick syrup that is thinned with water and then boiled with the hops to make the wort. This time however, I decided I would use an all grain method. I went to the home brew supply store, and because I didn't know exactly what I wanted or how much to buy, I ended up with a Belgian holiday ale recipe. The malted grains were crushed for me and blended in a large bag. I read up on all-grain brewing methods and selected a three stage extraction, which means that I would steep the grains in water at three different temperatures to encourage the enzymes to break down the starches into simpler sugars. 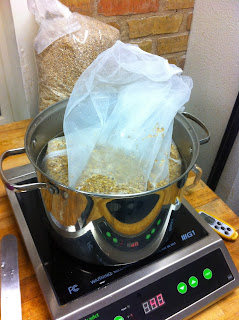 First I steeped the grains in 40 degree (C) water for a half hour, then 50 degree and finally 70 degree water. 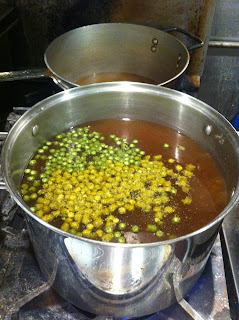 After all the sugars were extracted from the grains, I brought the wort to a boil and added the hops. 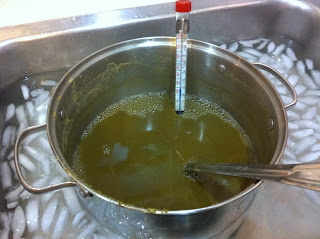 An hour later, it was time to cool the wort down to 80 degrees (F), the right temperature for the yeast to get a good start. 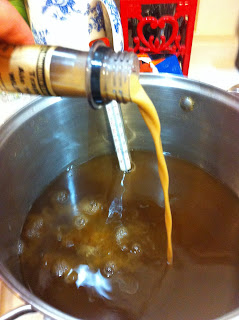 Then I pitched the wort with the Trappist yeast. I let it sit for two days after which I thought I had good activity. I started the dough, which begins with scalding the rye flour with boiling water, letting that cool and then making a sponge from that with additional liquid, unbleached wheat flour and normally yeast. This sponge should ferment for about an hour, then more flour, the syrup and salt are added to make the final dough. Unfortunately, after an hour I didn't have much growth to the sponge and especially because of the high sugar content of the final dough, I decided it would be best to add some yeast to the final dough mix. That worked and I got a delicious bread, but it wasn't what I wanted.

Well, I still had plenty of the wort left, so I decided to let it go another day and try again. I also started the whole process earlier in the day with the thought that perhaps the sponge might need more time. Because of the high sugar content, this bread bakes at a lower temperature than we normally run our deck oven, so I had a narrow window of time between shifts to let the oven cool a bit, bake the bread and then fire the oven back up. 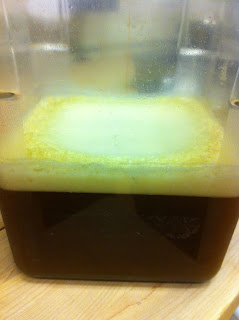 Here's the wort the next day, with plenty of frothy activity. 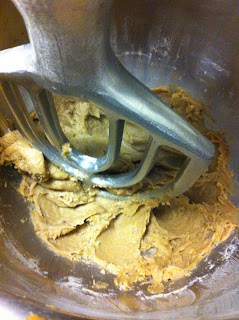 Scalding rye flour with boiling water is a common technique in Scandinavian baking. It helps control the enzymatic activity and also swells the starch, thoroughly hydrating it and giving the dough more structure. 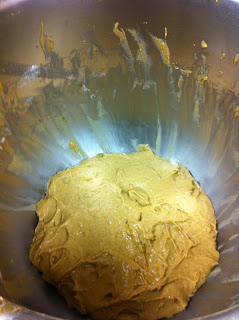 After it has cooled, the wort, some unbleached wheat flour and cloves and ginger were added to make the sponge. I was prepared to let it sit for two or three hours to see if I could get enough activity to perhaps forgo adding any yeast in the final dough. 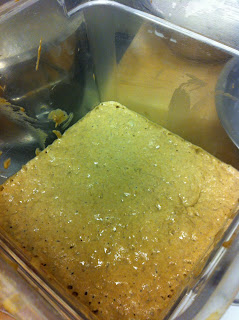 To my surprise and delight, after only an hour I had a bubbly, active sponge that had almost doubled in volume. 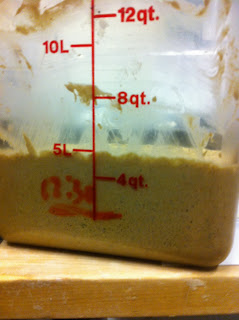 I let it go another half hour and this was the result, as active and well risen as the sponge made with baker's yeast. 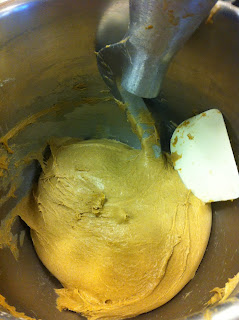 I added the additional flour, the syrup and salt but no extra yeast to mix this satiny dough. 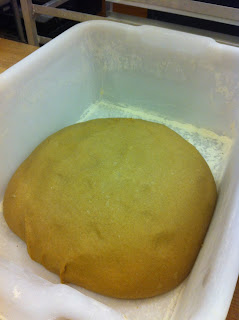 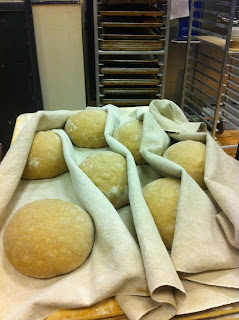 I shaped it into boules. 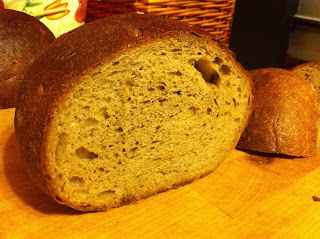 And this is the final result, leavened only with the Trappist Ale yeast.

I was pleased with the bread, the maltiness and hops came through the syrup and spices. Now I wonder even more what types of malt and hops would have been typical in the wort from a Swedish brewery. Perhaps the vörtbröd of the past was unique in each town or region according to how they brewed their local beer?

Apart from tracking down authentic vörtbröd, this experiment leads to other ideas to try out using malted grains and different strains of yeast. I think it would be interesting to try some lean, unsweetened doughs using a wort starter to see what different flavors might be brought out without masking them with sweetener or spices.

Posted by David Norman at 5:56 AM No comments:

Welcome to my new blog.

Here's a picture of the Doughpuncher from a few years back.  At the time, I was the bread instructor at the French Culinary Institute in New York.  I was cutting open and examining the day's baguettes, seeing how successful we were in obtaining a good open cell structure.  Looks like we could have done better, but that's why we practiced with baguettes every day of the six week course.
I have been baking bread now for over twenty five years.  I can hardly believe it has been that long.  Besides my stint at FCI, I also taught part time at the San Francisco Baking Institute, and I have worked at some really great bakeries, including Grand Central Baking in Seattle, TriBakery, Ecce Panis and Bouley Bakery in New York.
I am looking forward to sharing baking tips, my ideas about bread and how it fits into cuisine, a little about the life of a baker and news of my latest project here in Austin, Texas.  Stay tuned for more about that! 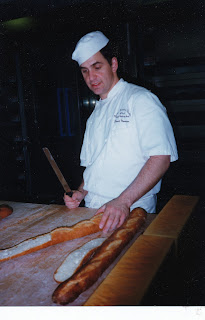